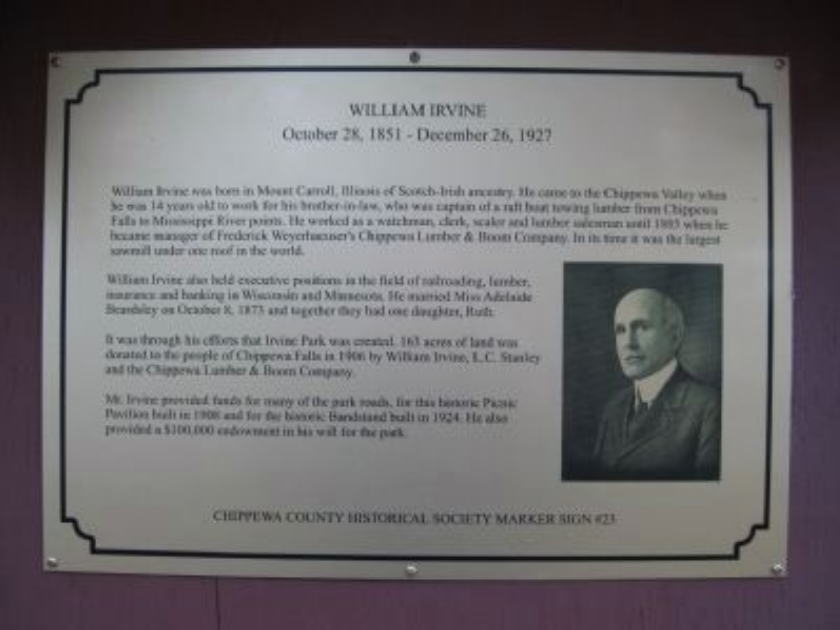 William Irvine was born in Mount Carroll, Illinois, of Scotch-Irish ancestry. He came to the Chippewa Valley when he was 14 years old to work for his brother-in-law, who was captain of a raft boat towing lumber from Chippewa Falls to Mississippi River points.

He worked as a watchman, clerk, scaler, and lumber salesman until 1885, when he became manager of Frederick Weyerhaeuser’s Chippewa Lumber & Boom Company. In its time, it was the largest sawmill under one roof in the world. William Irvine also held executive positions in railroading, lumber, insurance, and banking in Wisconsin and Minnesota.

He married Miss Adelaide Beardsley on October 8, 1873, and they had one daughter, Ruth. It was through his efforts that Irvine Park was created. 163 acres of land was donated to the people of Chippewa Falls in 1906 by William Irvine, L. C. Stanley and the Chippewa Lumber & Boom Company.

Mr. Irvine provided funds for many of the park roads, for this historic Picnic Pavilion built in 1908 and for the historic Bandstand built in 1924. He also provided a $100,000 endowment in his will for the park.