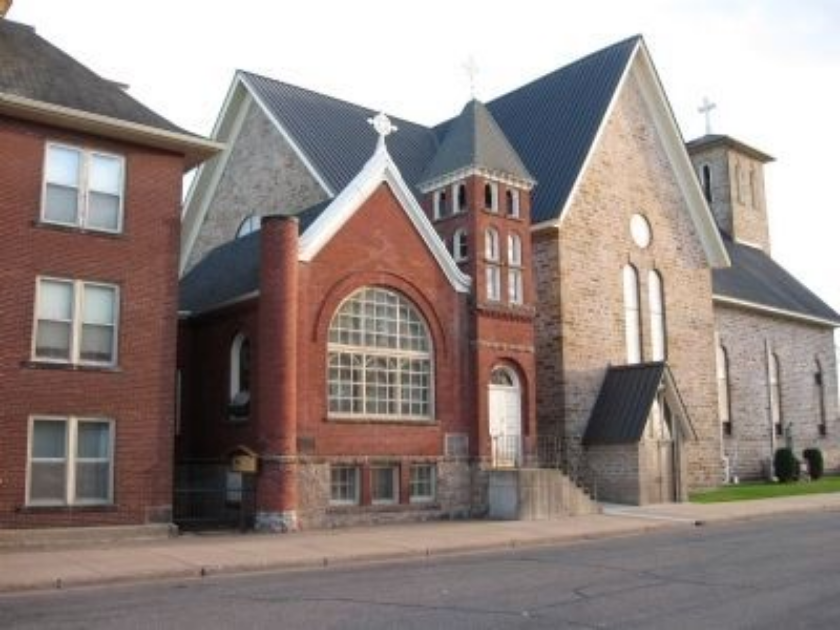 Reverend Goldsmith was born in Rochester, New York. At the early age of thirteen, he entered the provincial seminary of St. Francis near Milwaukee. He graduated in 1864 and entered the American College at Louvain, Belgium. There he earned two divinity degrees and was ordained a priest on July 25, 1868. After returning to the United States, he spent the winter as an assistant to St. Mary’s in Milwaukee.

The “Boy Priest,” as he was called, arrived in Chippewa Falls on May 25, 1869, and two days later said mass at the old St. Mary’s of the Falls Church. His first big work was the construction of Notre Dame Church. He began collecting money by visiting lumber camps and pioneer farms throughout the Chippewa Valley.

Construction of the church started in the spring of 1870 and was completed in August of 1872. In 1884 he helped build St. Charles Church and plan a permanent hospital staffed by the Hospital Sisters of St. Francis. In 1886 he helped build Holy Ghost Church. He also established a newspaper called “The Catholic Sentinel.” According to his doctors, Father Goldsmith died in 1890 at the age of 44 due to a stomach hemorrhage. He was buried near Notre Dame Church. Four years after his burial, the Goldsmith Chapel was built in his honor. His body was exhumed and placed in a crypt under the altar.

The four smaller stained glass windows each represent one of the four local Catholic organizations he founded: St. Jean Baptiste Society, the Catholic Knights (now called the Knights of Columbus), the Rosary Society, and the Ancient Order of Hibernians. Goldsmith Street on the north side of the city is named after him.