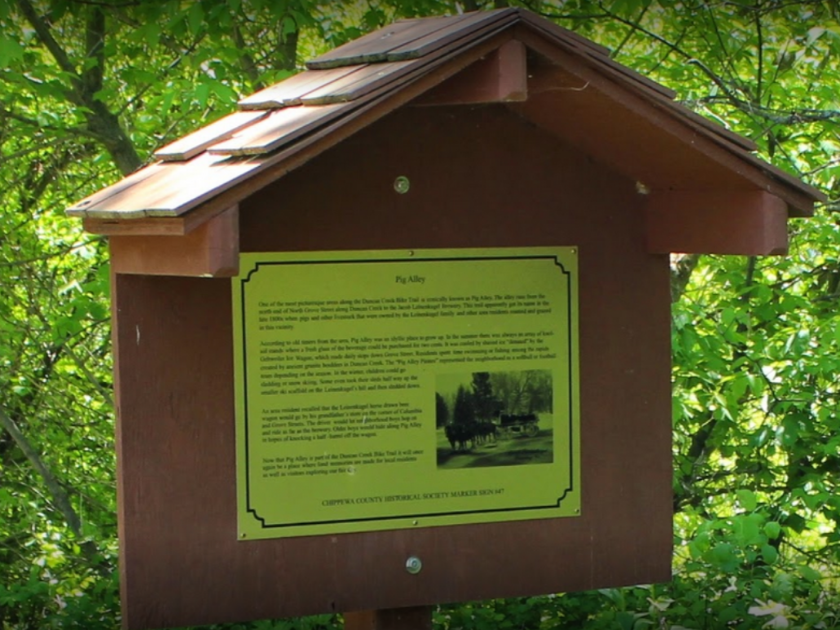 One of the most picturesque areas along the Duncan Creek Bike Trail is ironically known as Pig Alley. The alley runs from the north end of North Grove Street along Duncan Creek to the Jacob Leinenkugel Brewery. This trail got its name in the late 1800s when pigs and other livestock that were owned by the Leinenkugel family and other area residents roamed and grazed in this vicinity.

According to the old-timers from the area, Pig Alley was an idyllic place to grow up. There was always an array of kool-aid stands where a fresh glass of the beverage could be purchased for two cents in the summer. It was cooled by shaved ice “donated” by the Gehweiler Ice Wagon, which made daily stops down Grove Street.

Residents spent time swimming or fishing among the rapids created by ancient granite boulders in Duncan Creek. The “Pig Alley Pirates” represented the neighborhood as a softball or football team, depending on the season. In the winter, children could go sledding or snow skiing. Some even took their sleds halfway up the smaller ski scaffold on the Leinenkugel’s hill and sledded down.

An area resident recalled that the Leinenkugel horse drawn beer wagon would go by his grandfather’s store on the corner of Columbia and Grove Streets. The driver would let neighborhood boys hop on and ride as far as the brewery. Older boys would hide along Pig Alley in hopes of knocking a half-barrel off the wagon.

Now that Pig Alley is part of the Duncan Creek Bike Trail, it will once again be a place where fond memories are made for local residents and visitors exploring our fair city.