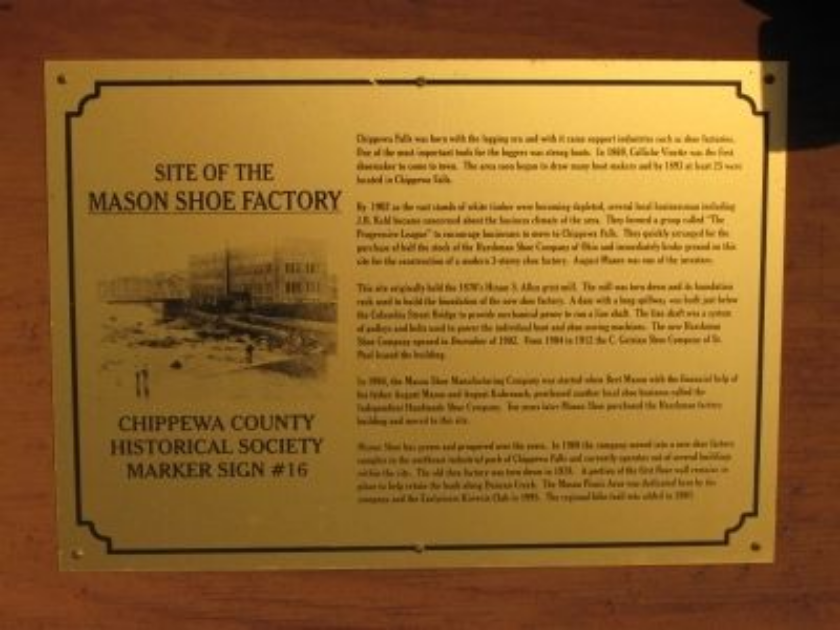 “Chippewa Falls was born with the logging era, and with it came support industries such as shoe factories. One of the most important tools for the loggers was strong boots. In 1869, Colliche Vinette was the first shoemaker to come to town.

The area soon began to draw many bootmakers, and by 1893 at least 25 were located in Chippewa Falls. By 1902 as the vast stands of white pine timber were becoming depleted, several local business people, including J.B. Kehl, became concerned about the area’s business climate.

They formed a group called “The Progressive League” to encourage businesses to move to Chippewa Falls. They quickly arranged to purchase half the stock of the Harshman Shoe Company of Ohio and immediately broke ground on this site to construct a modern 3-story shoe factory. August Mason was one of the investors. This site initially held the 1870s Hiram S. Allen grist mill. The mill was torn down, and its foundation rock was used to build the new shoe factory’s foundation. A dam with a long spillway was constructed just below the Columbia Street Bridge to provide mechanical power to run a line shaft. The line shaft was a pulleys and belt system used to power the individual boot and shoe sewing machines. The new Harshman Shoe Company factory opened in December of 1902. From 1904 to 1912, the C. Gotzian Shoe Company of St. Paul leased the building.

In 1904, the Mason Shoe Manufacturing Company was started when Bert Mason, with his father’s financial help, August Mason and August Kuhrasch, purchased another local shoe business called the Independent Handmade Shoe Company. Ten years later, Mason Shoe purchased the Harshman factory building and moved to this site. Mason Shoe has grown and prospered over the years. In 1968 the company moved into a new shoe factory complex in the northeast industrial park of Chippewa Falls and currently operates out of several buildings within the city.

The old shoe factory was torn down in 1978. A portion of the first floor wall remains in place to help retain the bank along Duncan Creek. The Mason Picnic Area was dedicated here by the company and the Earlyrisers Kiwanis Club in 1995. The regional bike trail was added in 2003.”