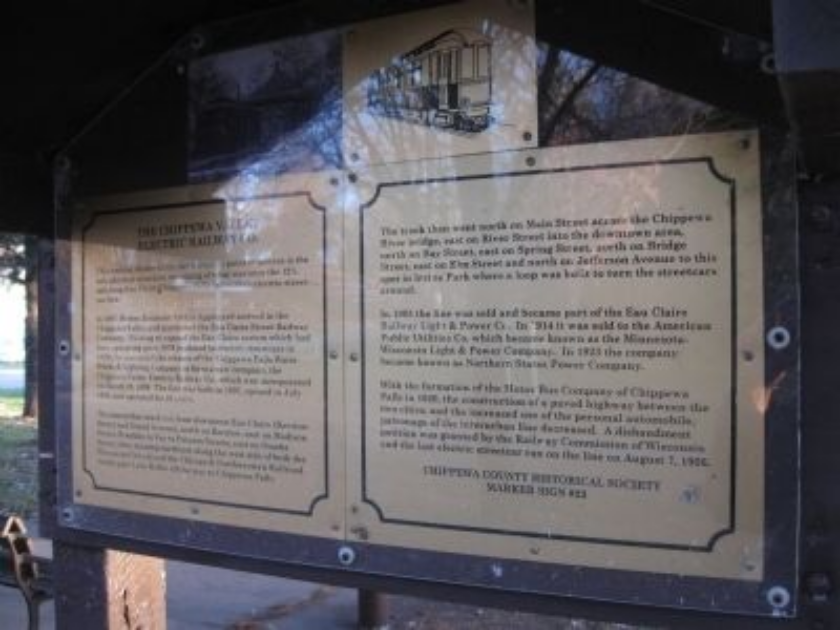 This waiting shelter at the northernmost point of service is the only physical structure remaining of what was once the 12 ½ mile long Eau Claire/Chippewa Falls interurban electric streetcar line. In 1897 Boston financier Arthur Appleyard arrived in the Chippewa Valley and purchased the Eau Claire Street Railway Company.

Wishing to expand the Eau Claire system, which had been operating since 1879 (updated to electric streetcars in 1889), he convinced the Chippewa Falls Water Works & Lighting Company owners to form a new company. The new company, Chippewa Valley Electric Railway Co., was incorporated on March 29, 1898. The line was built in 1897, opened in July 1898, and operated for 28 years.

The interurban track ran from downtown Eau Claire (Barstow Street and Grand Avenue), north on Barstow, east on Madison Street, Franklin to Fay to Putnam Streets, east on Omaha Street, then running northeast along the west side of both the Wisconsin Central and the Chicago & Northwestern Railroad tracks past Lake Hallie all the way to Chippewa Falls. The track then went north on Main Street across the Chippewa River bridge, east on River Street, into the downtown area, north on Bay Street, east on Spring Street, north on Bridge Street, east on Elm Street, and north on Jefferson Avenue to this spot in Irvine Park where a loop was built to turn the streetcar around.

In 1905 the line was sold and became part of the Eau Claire Railway Light & Power Co. In 1914 it was sold to the American Public Utilities Co., which became known as the Minnesota-Wisconsin Light & Power Company. In 1923 the company became known as Northern States Power Co. With the formation of the Motor Bus Company of Chippewa Falls in 1920, the construction of a paved highway between the two cities, and the increased use of the personal automobile, the interurban line’s patronage decreased. The Railway Commission of Wisconsin granted a disbandment petition, and the last electric streetcar ran on the line on August 7, 1926.