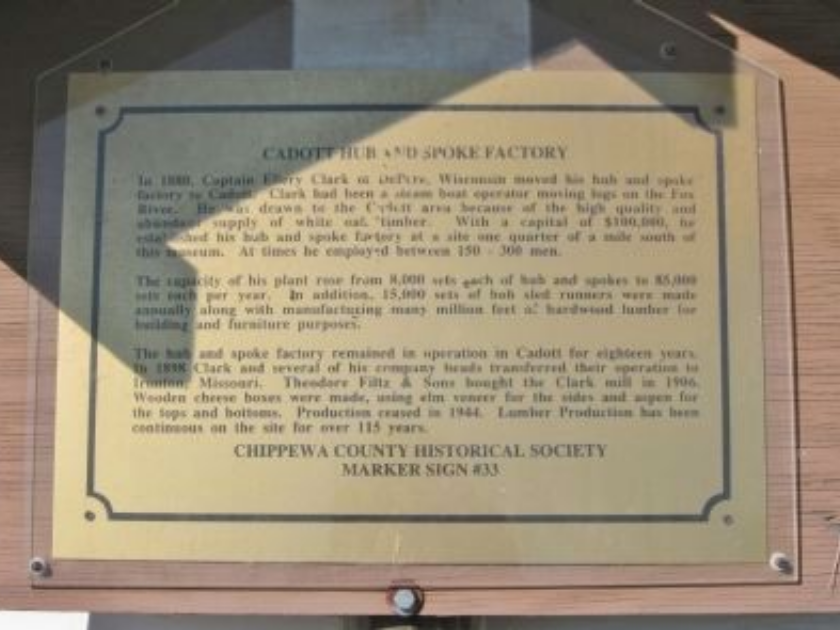 In 1880, Captain Ellery Clark of DePere, Wisconsin, moved his hub and spoke factory to Cadott. Clark had been a steamboat operator moving logs on the Fox River. He was drawn to the Cadott area because of the high quality and abundant supply of white oak timber.

With a Capitol of $100,000, he established his hub and spoke factory at a site one-quarter of a mile south of the museum. At times he employed 150 – 300 men. His plant’s capacity rose from 8,000 sets each of hub and spokes to 85,000 sets each per year. In addition, 15,000 sets of bobsled runners were made annually, along with manufacturing many millions of feet of hardwood lumber for building and furniture purposes.

The hub and spoke factory remained in operation in Cadott for eighteen years. In 1898 Clark and several of his company heads transferred their operation to Ironton, Missouri. Theodore Filtz & Sons bought the Clark mill in 1906. Wooden cheese boxes were made, using elm veneer for the sides and aspen for the tops and bottoms. Production ceased in 1944. Lumber production has been continuous on the site for over 115 years.